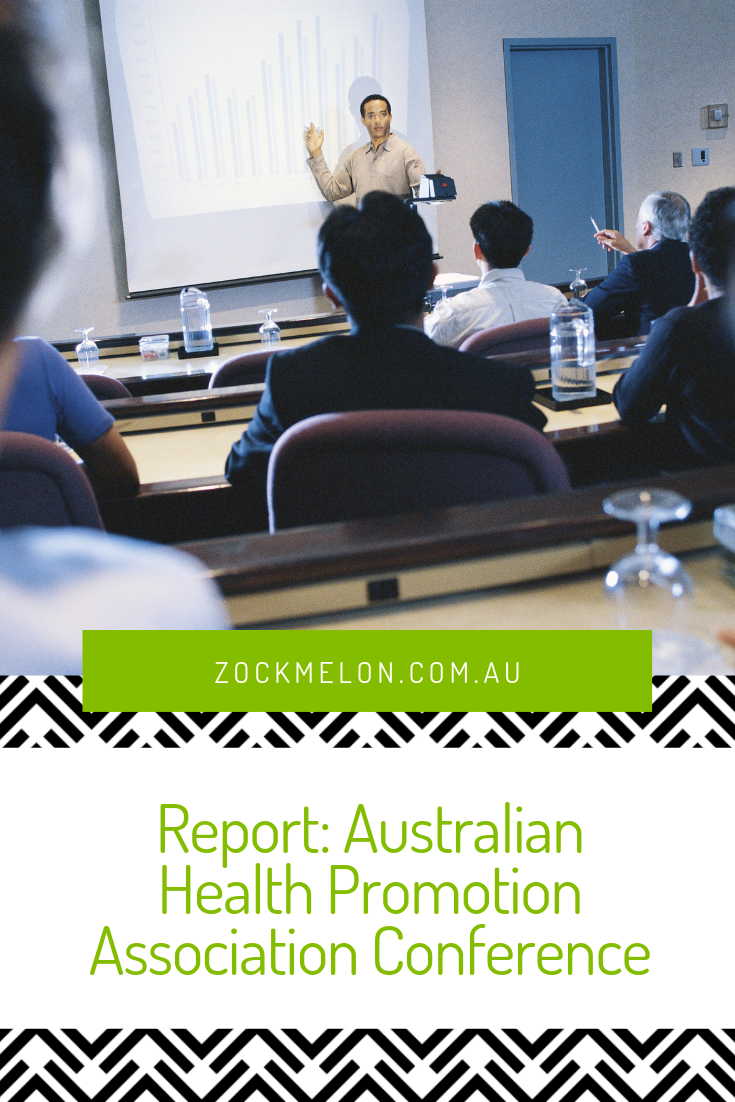 Without a doubt it is a tough time to be a health promoter in Australia.  Several states have severely cut their workforces.  Following reviews in SA Health, my entire work unit including my position has been lost.  It stings.

For this reason, it is crucial to keep professional practice and networking alive.  The Australian Health Promotion Association 2013 Conference brought together 450 health promotion professionals from across sectors to discuss, debate and stimulate action on contemporary health promotion issues.

This conference had a strong focus on workplaces, early childhood settings, schools, and community-based interventions.  This is reflective of where the current funding is directed via the National Partnership Agreement on Preventive Health.  The use of technology, apps and digital media was also apparent in the conference, reinforcing the notion that being online or on a device is a setting where people go and where people can be reached.

There was a different level of engagement with the speakers and delegates this year thanks to Twitter.  I thoroughly enjoyed reading the tweets during the conference and participated as much as I could myself.  Speakers should take note: keep your main take home messages to tweetable quotes to promote Twitter-based dissemination.  Thanks to AHPA for having a clear hashtag that could be used by delegates.  Hopefully #AHPA2014 will have even more tweeps joining the party. 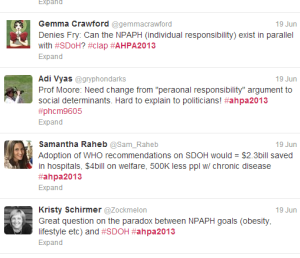 As a health promoter-come-social media consultant, this conference definitely highlighted a challenge for any health promotion practice that utilises technology.  How do we reconcile that health promotion is best worked on multiple issues for populations, when use of technology is itself an individual pursuit?  Despite this, Zockmelon’s workshop “So You Want to Make an App – What your Organisation Needs to Know” was very well attended with many sectors looking at online or mobile app development to achieve their program objectives.  Use of technology has indeed become another strategy in the toolbox of health promoters.  See the fantastic Croakey article summary for tips from this workshop. 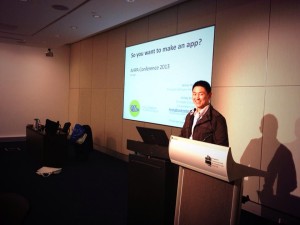 Standout sessions included the plenary from Professor Mark Dooris from the University of Central Lancashire who spoke, appropriately via video link, on ‘People, Place, Planet: Healthy, Sustainable and Connected Settings for the 21st Century.’ This session contextualised health promotion practice with the broader framework of sustainability and advocacy for the earth.  He left us with a profound reminder: “Ecological determinants risk being side-lined by a focus on social determinants”.

Professor Helen Roberts from University College London while speaking about children’s environments, offered some transferrable advice on health promotion advocacy, “We need to find a way to deliver a message that anyone can understand, not just nerdy academics”.  This was echoed by other speakers including Dr John Buchanan of The University of Sydney who suggested “health promoters should note and document your relevance, and document your plan for the next 5 years.”  The message is clear – we need to get better at proving ourselves and the evidence that supports our work.

Health promotion discourse about “targeting” was also challenged during the conference.  Professor Helen Roberts stated “Targeting is only cutting off the tail, but the tail is still part of the animal”.  She went on to say, “Targeting is expensive and stigmatising.”  When speaking on universal and targeted health promotion, delegates were reminded that the strongest empirical evidence comes from largely downstream interventions, and this can threaten the huge benefits of universal and upstream health promotion.

Dr Lisa Gold from Deakin University presented some fundamentals of health economics which all health promoters need to understand.  This included one basic concept that we should draw on regularly, which is the concept of “opportunity cost”.  What is the value foregone by choosing to use the resources we have in one way rather than the best alternative use?  I’m sure this is a concept not asked often enough when allocating resources.

Dr Liz Harris, from The University of New South Wales spoke about the wisdom of hindsight in her work with disadvantaged communities.  She stated, “The things I’ve been most successful with have taken 17 years, not 3 years.”  For her, there were three T’s of success in health promotion: Time, Trust, and Tenacity.  Perhaps tenacity needs to be on the list of health promotion competencies?  She also gave what for me was an honest reflection of community development: “We keep acting when we are in disadvantaged communities as if we don’t know what works.  We do know – we just don’t want to do it!”

My take home, tweetable messages for anyone not able to attend the conference:

I would like to thank the AHPA SA Branch for providing me with a scholarship to attend the 21st National AHPA Conference.